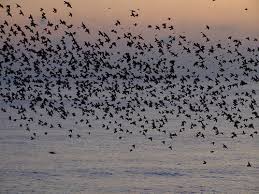 The theory of the group mind was developed by Gabriel Tarde and taken up by Durkheim. The thesis that crowd behavior is not simply the sum of individual behaviors or individual motives was a milestone in the development of sociology; it allowed sociology to differentiate itself from economics, psychology, etc. We must understand this if we wish to understand Luhmann’s theory of society, particularly functional differentiation.

A crime is, then, an act which offends strong and defined states of the collective conscience.

For Tarde, groups form through repetition, which in society takes the form of imitation. The editor of The Laws of Imitation wrote,

In La Logique sociale, which appeared in 1895, we have [Tarde’s] explanation of the way in which elemental phenomena, undergoing undergoing endless repetition, are combined in concrete groups, bodies, systems, especially mental and social systems.

In society, if the same communicative event repeated itself it would not be informative; it’s only informative the first time. Events vary while remaining the same kind of event. Repetition, or imitation, exists for the sake of variation. No imitation or repetition is an exact copy because each discrete event is unrepeatable. As Tarde writes,

Repetition exists, then, for the sake of variation. Otherwise, the necessity of death . . . would be incomprehensible; for why should not the top of life spin on, after it was wound up, forever? But under the hypothesis that repetitions exist only to embody all the phases of a certain unique originality which seeks expression, death must inevitably supervene after all these variations have been fully effected.

I will mention a discovery . . . the discovery of America. This discovery was imitated in the sense that the first voyage from Europe to America, which was conceived of and executed by Columbus, came to be repeated more and more frequently by subsequent navigators. Every variation in these after-voyages constituted a little discovery, which was grafted upon that of the great Genoese, and which, in turn, found imitators.

And now my readers will realise, perhaps, that the social being, in the degree that he is social, is essentially imitative, and that imitation plays a role in societies analogous to that of heredity in organic life or to that of vibration among inorganic bodies. If this is so, it ought to be admitted, in consequence, that a human invention, by which a new kind of imitation is started or a new series opened,—the invention of gunpowder, for example, or windmills, or the Morse telegraph,—stands in the same relation to social science as the birth of a new vegetal or mineral species (or, on the hypothesis of a gradual evolution, of each of the slow modifications to which the new species is due), to biology, or as the appearance of a new mode of motion comparable with light or electricity, or the formation of a new substance, to physics or chemistry.

In a footnote, Tarde adds,

We can see a resemblance to Bruno Latour’s work, and Latour was influenced by Tarde, as was Deleuze.