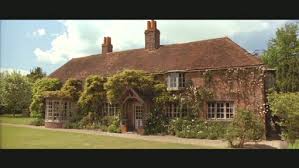 The Age or Property holds bitter moments even for the proprietor. When a move is imminent, furniture becomes ridiculous. . . . The feudal ownership of land did bring dignity, whereas the modern ownership of movables is reducing us again to a nomadic horde. We are reverting to the civilization of luggage, and historians of the future will note how the middle classes accreted possessions without taking root in the earth, and may find in this the secret of their imaginative poverty.

Howard’s End explores the significance of home or a sense of place–Howard’s End is a place. Without a sense of place, one’s imagination becomes impoverished, according to the narrator. Railroads, the automobile, and other inventions put a strain of the traditional sense of place. At one point in the narrative, the main character takes a car trip from London to a smaller town, and they accidentally run over a cat on a village road and pay the owner of the cat some money (like under feudalism a lord might compensate another lord for the death of a serf). In describing Margaret Schlegal’s state of mind, the narrator says,

But she felt that the whole journey from London had been unreal. They had no part with the earth and its emotions. They were dust, and a stink, and cosmopolitan chatter, and the girl whose cat had been killed lived more deeply than they.

That village girl whose cat was killed had a sense of place, at least according to Margaret. In modernity, time supplants place as an orienting principle. For instance, while driving a car, we say we are “two hours away” rather than a 120 miles away. We see the same tension between spatial and temporal orientations in Faulkner, as his narrators pay a great deal of attention to the invasion of the automobile and how it sped up and disrupted twentieth-century life. The loss of a traditional sense of place is also dramatized in Chekhov’s The Cherry Orchard. Technologies of writing and printing have played an important role in the shift away from place and toward time. We receive letter and respond when we have time.  We buy a book and read it when we have time.

In discussing the evolution of dissemination technologies, like writing and printing, Luhmann spoke of the “waning need for societal operations to be spatially integrated.” He wrote,

By integration, I mean restriction of the degree of freedom of systems. Writing had already made the understanding of and response to communication independent of the physical presence of the utterer. However, in the Middle Ages, semantic evolution still depended on which libraries housed what manuscripts and what chance led readers to the rare texts to gain inspiration from the ideas they conveyed. The bodies of individuals and thus their presence in particular places did indeed play an important role. This changed gradually with the spread of printed writings. When in the eighteenth century, the integration of society was left to “public opinion,” this amounted ultimately to waiving spatial integration, if not integration itself. For “public” means nothing other than giving access to anyone, relinquishing control of access, with consequent structural uncertainty of spatial integration.

Spatial integration means that the degree of freedom of systems, that is, the set of possibilities they can realize, depends on the locus in space where each operates and hence on specific local conditions. . . . However, with the advent of writing and printing , and then with increasing travel and external studies by members of the upper classes, spatial distance and spatial boundaries lost their restrictive character.  . . . As spatial integration dwindled, so did the certainties that built on it. . . .

Where this has become a normal condition in society, sociological theory must also adapt to it. System boundaries can no longer be understood as edges of the system, as skins or membranes by which a system fortifies itself, so to speak. . . . Rather, a social system is nothing other than the one side, the inner side, the operating side of the form of the system, and with every operation of the system, the distinctness of the system as opposed to the environment is reproduced. The autopoiesis of a meaning system is nothing other than the reproduction of this difference.

Luhmann is more interested in time than in space. Everything comes back to the temporal dimension (although he discusses three dimensions: factual, social, and temporal). For instance, law is about time insofar as it about the stabilization of normative expectations.